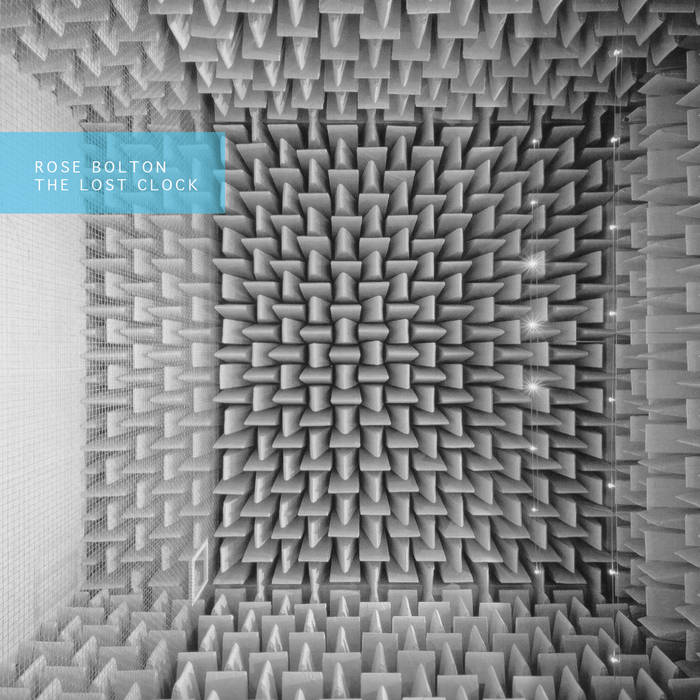 It might be easy to assume that the distinctly focused compositional voice unveiled on Rose Bolton's The Lost Clock is the product of its creator's rigorous, almost hermetic dedication to her own particular aesthetic universe. A quick survey of Bolton's artistic career, however, reveals that her carefully sculpted approach to abstract electronica has been forged through a longstanding engagement with a wide range of intertwining creative activities.

This album—coming out on Important Records' cassette imprint, Cassauna demonstrates both the Toronto-based composer's unique mastery of colour and her gift for breathing a tactile, organic quality into synthetic landscapes. Bolton's distinctive sensibility is akin to that of a painter—every hue has been carefully mixed so as to imbue its accompanying gesture with its own life and personality. This tangible dimensionality her electronic work assumes, however, can be traced back to the work Bolton has been doing since the 1990's. She has produced a large and varied catalogue of work that includes pieces for solo performers, chamber ensembles, orchestra, electronics, voice, and to accompany installations and films. A number of her works reside in several of these zones simultaneously, such as Song of Extinction, an ambitious collaboration between herself, filmmaker Marc de Guerre, poet Don McKay, and multiple live ensembles, that was mounted in an abandoned power station for Toronto's Luminato Festival.

This quasi-instrumental vitality isn't the only feature of The Lost Clock that reflects Bolton's diverse artistic practice. It can also be heard within the structural realm. Each of the collection's four tracks trace a patient unfolding and favour a certain roundness of timbre, even as finer details begin to fidget along the perimeter of the music. As with her writing for the concert hall, Bolton doesn't shy away from the evocative here, yet she doesn't pursue this poignancy through conventional, direct or quasi-narrative means. Her compositions lead the listener gradually through their impressionistic sonic scenery, but neither the path they take nor their ultimate destination are at all predictable. The ostensible gentleness each piece exudes dissolves as dissonances slowly insinuate themselves, obscure textures writhe just out of earshot, percussive lattice work materializes, or as the overall blend begins to exert a heavier weight. Her lucid-dream vision of form functions in tandem with her acute micro-level attentiveness to engender a vivid and elusive soundworld that resists classification.

Over more than two decades Rose Bolton has been garnering acclaim and enthusiasm from audiences and major collaborators alike. Last year, her brooding string quartet The Coming Of Sobs was nominated for Classical Composition of the Year at the JUNO Awards, following earlier accolades such as SOCAN Awards for Young Composers, and the Canadian Music Centre's Norman Burgess Fund. Her music has been commissioned by the likes of the CBC, stalwart experimental music festival the Sound Symposium, as well as key interpreters and ensembles such as percussionist David Schotzko, accordionist Joseph Petric the Esprit Orchestra, Continuum, Arraymusic, the Kitchener-Waterloo Symphony, and guitar quartet Instruments of Happiness (led by Tim Brady).

Together with Marc de Guerre, she produced an 8-speaker sound and video installation for Toronto's Nuit Blanche Festival. She's also been featured by the likes of revered pianist Eve Egoyan, The Vancouver Symphony, L'ensemble contemporain de Montréal, The Music Gallery, and AKOUSMA, while appearing in concert alongside the likes of Jerusalem in My Heart (Constellation Records), Tanya Tagaq, and Francis Dhomont.

As a performer, she variously employs electronics, violin, and viola. Parallel to her engagement with exploratory approaches, she's invested in the fiddle traditions of the British Isles, and various Canadian regions. She teaches this repertoire at the Royal Conservatory of Music.

Bolton has also performed with Rhys Chatham, Owen Pallett, opened for Charlemagne Palestine, and appears on recordings by the likes of Chatham and Aidan Baker. In 1999 she joined the Canadian Electronic Ensemble, whose fifty-years together make them the world's longest-running live-electronic music group. In February 2020, the CEE held a residency and provided guest lectures at Carnegie Mellon University's music department. Bolton has also led workshops at the Banff Centre, also founded the SOCAN/ Moog Audio-sponsored program EQ: Women in Electronic Music, which worked to foster community and mentorship among (trans/cis) women and non-binary individuals.

"[I]ts three movements are quite energetic, even excited, with the violins sweeping past like whirling shoal of fish as the cello provides a steady drone, like a massive field of seaweed swaying back and forth." — PHIL FREEMAN, THE WIRE on The Coming of Sobs

"Transported by Toronto's Rose Bolton opens like an ancient dithyramb undulating with gestures that pulled kindred spirits in from the cold, to dance among the oboes. Like a Houdini séance, we crossed over. Sprightly gestures in the harp led to the strings; soft brass ushered in Penderecki-like tonal clusters. The balance between the pre-recorded material and the live orchestra seemed effortless, which is no small feat." — MICHAEL VINCENT, TORONTO STAR

"But perhaps the most impressive craft contribution is Rose Bolton and Norah Lorway’s minimalist and electronic score, which not only manages to add a disquieting, almost creepy undertone to even the most beautiful shots and which, because it is so clearly electronic, keeps emphasizing the human or man-made element." — BOYD VAN HOEIJ, THE HOLLYWOOD REPORTER on Anthropocene: The Human Epoch